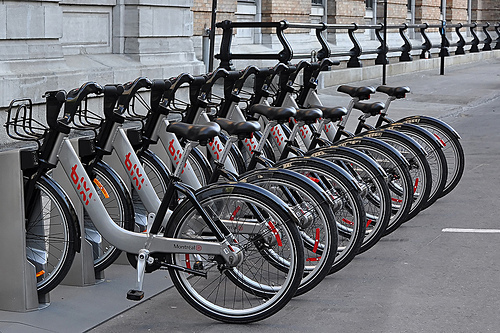 Researchers at McGill studied house sales in central Montreal before and after the Bixi bike sharing system was launched in Montreal in 2009. They found that a typical home in the central Montreal area they studied had about 12 Bixi stations nearby, which had increased its value by 2.7 per cent – or $8,650 on average.

The team arrived at these conclusions by looking at the Multiple Listings Service (MLS) database of all home sales in most of the island of Montreal from 1996 to 2012. They focussed on 2400 units that were sold more than once during this period, in order to study the increase in values. Once they had filtered out other factors they found that each bike-sharing station in the neighbourhood lead to a $700 increase in property values for the nearby houses.

“Bixi has been under attack a lot, but the system has had some positive effects,” says Ahmed El-Geneidy, lead author and Associate Professor at McGill School of Urban Planning. “It favours environmentally friendly and healthy habits and now we know it has significantly increased the value of homes in Montreal. This data shows people here value bicycle sharing.”

What mayors should know

It is likely that other cities with similar bike sharing systems, like New York, Toronto, or Paris, will see similar effects on housing prices. “We expect studies on other cities will also find a positive impact on house sales,” El-Geneidy says.

“Cities that are considering the implementation or expansion of bicycle share systems must keep in mind that although they require a major investment at the beginning, the combined benefits from such systems, including an increase in property taxes, might well outweigh the initial costs.”

The amount of the increase in property value would probably vary from one city to another. “It depends on how much people in a particular city value cycling,” El-Geneidy explains. The quality of the system may also play a role. “Because it was built to showcase the Bixi model and export it, the network in Montreal is very good. Stations are well spread both downtown and in residential neighbourhoods where many cyclists live, such as Le Plateau.”