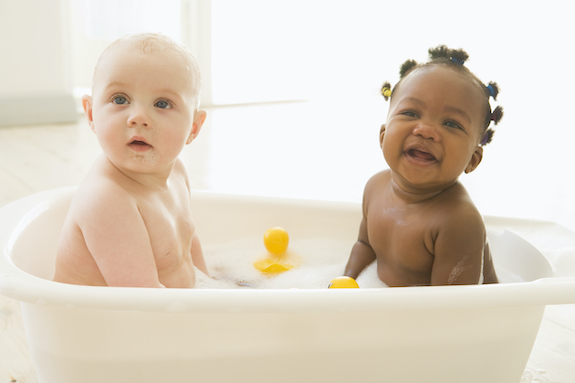 Babies prefer baby talk in any language, but particularly when it’s in a language they’re hearing at home, according to a new study including close to 700 babies on four continents. The research, which was published in the journal Advances in Methods and Practices in Psychological Science and included researchers from McGill University, showed that all babies respond more to infant-directed speech – baby talk – than they do to adult-directed speech. It also revealed that babies as young as six months can pick up on differences in language around them.

“We were able to compare babies from bilingual backgrounds to babies from monolingual backgrounds, and what seemed to matter the most was the match between the language they heard in their everyday environment and the language we were playing them in the study,” says primary investigator Krista Byers-Heinlein, an associate professor of psychology in Concordia University’s Faculty of Arts and Sciences, who directs the Concordia Infant Research Lab.

“It is natural for Canada to lead research into bilingualism and language learning,” said Linda Polka from McGill’s School of Communication Disorders. Her research group, the McGill Infant Speech Perception Lab – helped build this rich data set by testing babies from bilingual (mostly French/English) families and also babies from monolingual French families. “Roughly a third of the contributing labs in this project – and more than any other country – are in Canada and Canadian scientists also played a prominent role in the leadership team.”

Babies from around the globe

The unique study involved 17 labs on four continents – in Canada, the United States, Europe, Australia and Singapore – and tested 333 bilingual and 385 monolingual children. Babies were separated into groups of 6-9-month-olds and 12-15-month-olds. The bilingual babies shared at least one of their two languages with the monolinguals.

Each baby was played short, pre-recorded tapes of English-speaking mothers using infant-directed and adult-directed speech. The researchers then measured each baby’s looking time while those recordings were playing.

Not all of the babies were from homes in which English was spoken. The global nature of the study ensured many different language combinations were represented. Nevertheless, all children, regardless of language, preferred infant-directed English to adult-directed English.

The more familiar the language, the longer the babies listened

Polka adds, “Working with the Many Babies Consortium allowed us to leverage the diverse language experiences and the vast research expertise that is found in infant labs across the world. We learned first-hand how to engage in truly cooperative research as well as what can be achieved.”

The researchers believe that this global collaboration and the access that it provides to all these different communities will allow them to make progress in understanding bilingualism, and especially the variability of bilingualism.