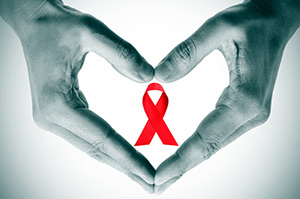 World AIDS Day is observed on December 1 every year, reminding us that the fight against the AIDS pandemic is far from over. More than 36 million people have died since it emerged in the early 1980s. Today, 35.3 million people around the world are living with the virus, including 71,000 in Canada. Every day, 6,800 people are infected. Two researchers from the Research Institute of the McGill University Health Centre (RI-MUHC) tell us about significant progress made over the past 25 years and what remains to be done to stem the pandemic.

The theme for World AIDS Day 2014 is “Getting to Zero”: zero new HIV infections, zero discrimination and zero HIV-related deaths. Dr. Jean-Pierre Routy, associate professor of Medicine, Division of Experimental Medicine at McGill and expert in HIV pathogenesis at the Royal Victoria Hospital of the MUHC, believes it’s an appropriate theme. “We have the tools to almost totally block infection because triple therapy, the combination of three antiretroviral drugs, is very effective. It’s administered in one pill each day, and has very few side effects. Even uninfected people can increase their protection by 50 per cent by taking a combination therapy 12 hours before sexual relations.”

Effective treatments are available and the epidemic has stabilized in Canada, but Dr. Routy says there are still gaps in HIV care that facilitate transmission of the virus. “A quarter of those infected don’t know they are HIV positive, 10 per cent are followed but don’t receive treatment, or their treatment is suboptimal. That means 35 per cent of infected Canadians remain a source for transmitting the virus.”

Over the past 30 years, researchers around the world have contributed in various ways to the development of a safe and effective preventive vaccine. Among them is Dr. Nicole Bernard, a researcher in infection and immunity at the RI-MUHC and associate professor of Medicine at McGill. Her work on cellular immunity has been an important step in the development of therapies or vaccines.

“I’m interested in how people with two specific genes that influence the activity of natural killer cells, also known as NK cells, are protected against HIV infection,” she says. “These people appear to be able to destroy infected cells right after exposure to the virus. I want to determine the potential and limitations of this discovery for vaccines that protect against HIV infection.”

In a fight of this magnitude collaboration between scientific researchers and clinicians is essential. Dr. Bernard, for example, studies immune cells taken from the blood of HIV-positive patients being followed by Dr. Routy. The results of her research will then inform the hematologist’s work with his patients.

Also essential is the funding for research. In 2013, Dr. Routy was one of the nine co-leaders of the Canadian HIV Cure Enterprise (CanCURE), a research program awarded $ 8.7 million over five years by the Canadian Institutes of Health Research to find new treatments for HIV/AIDS. “We are working on two strategies: a therapeutic vaccine and a vaccine combined with immunotherapy,” he says.

In addition to a vaccine and increasingly effective treatments, screening, prevention and the fight against stigma and discrimination continue to be essential weapons in eradicating HIV. “People should not feel shame or fear with regard to their families or employers,” says Dr. Routy. “If they are treated early, these people will not be sick. This will benefit all of society in the long term.”