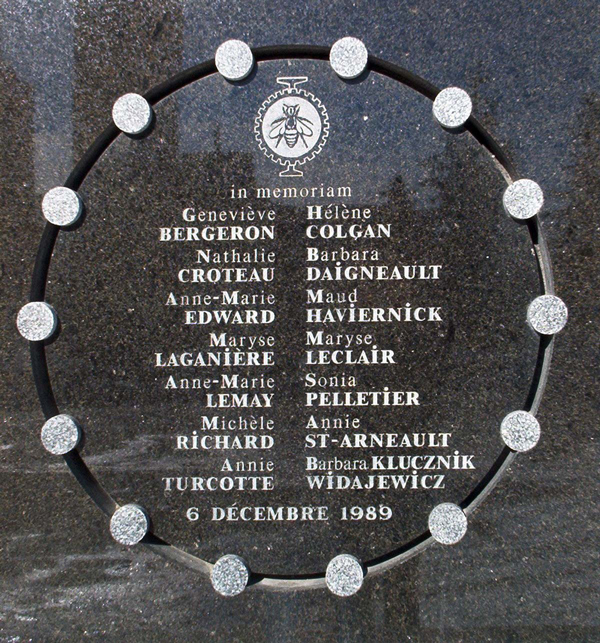 It took time, in those pre-Internet, pre-social media days, for the enormity of the horror to spread and be understood. Shots, many of them, had been fired at the Université de Montréal’s École Polytechnique engineering school, but, in the snowy early evening of Dec. 6, 1989, the details emerged in fragments, slowly.

It was an otherwise ordinary Wednesday when ambulances and police cars descended on the U de M campus and stretchers were rushed in through the doors under the increasing glare of the gathering TV lights.

Fourteen women, all but one of them students anticipating the promise of bright futures, had been murdered. Another 14, 10 of them women, had been shot and wounded by Marc Lépine, whose misogynistic agenda to single out feminists for death sent chills around the world. It was over in a little less than 20 minutes, when Lépine finally turned his gun on himself.

Next Saturday will mark the 25th anniversary of the Polytechnique massacre, a somber milestone that will be marked by events at U de M, as well as at McGill and on other campuses.

“Each year, The Sexual Assault Centre of McGill Students’ Society (SACOMSS) hosts a memorial service honouring the 14 women killed in the 1989 Polytechnique massacre,” said an organizer of the service, Samantha Shier. “Gender-based violence continues to occur everyday and is experienced in multiple forms. This event is not only about remembering, but is about calling for change by supporting and valuing the lives of the people who are most impacted by such violence.

“Please join us on December 6th to commemorate these fourteen women and to stand in solidarity against gender based violence.”

The anniversary of the massacre has since 1991 been commemorated as the National Day of Remembrance and Action on Violence Against Women. McGill’s flags will fly at half-staff on Dec. 6.

A number of events are being held to mark the anniversary this year. They include: