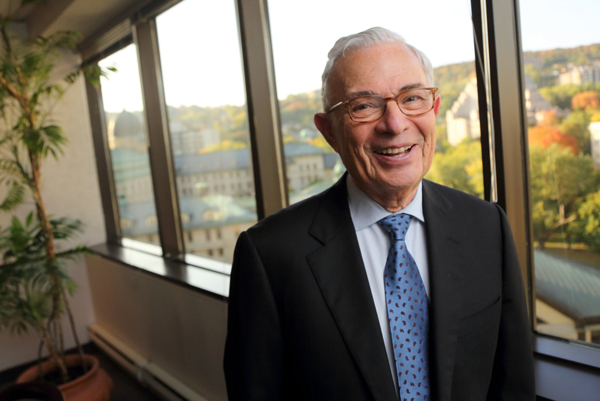 The Ludmer Centre for Neuroinformatics and Mental Health takes a unique approach to uncovering the mysteries surrounding mental illness. A partnership between the Douglas Mental Health University Institute, the Jewish General Hospital, the Montreal Neurological Institute and McGill, the centre focuses on the study of young brains, since many of the most prevalent forms of mental illness take root during childhood.

The three McGill professors who serve as the centre’s principal investigators bring their own distinct forms of expertise to the mix. The Douglas’s Michael Meaney is one of the pioneers of epigenetics, having demonstrated that early traumatic experiences can affect the very manner in which genes are expressed. The MNI’s Alan Evans is an internationally recognized leader in neuroimaging techniques and a driving force behind the creation of BigBrain, the first high-resolution 3D digital model of a human brain. The Jewish General’s Celia Greenwood is an expert on statistical methods who combs genetic and genomic data in search of patterns that might yield new insights into how various diseases progress – her past work turned up important new information on colorectal cancer.

The centre might not exist at all if not for Irving Ludmer. The Irving Ludmer Family Foundation supplied $4.5 million in funding last year to launch the centre with the Douglas and the Jewish General as the principal partners. More recently, the foundation made a second gift of nearly $3 million, which allowed the Neuro and McGill to become more actively involved. A 1957 graduate from McGill’s Faculty of Engineering, Ludmer is the former president of the Steinberg’s grocery chain and the current president of Cleman Ludmer Steinberg Inc., an investment holding company. Recently, the McGill Reporter spoke to him about his hopes for the centre.

How did you first get involved in the centre’s formation?

It all started with my interest in consciousness. Philosophers have been arguing about it for ages. What is consciousness? How did it come about? I live in Montreal and McGill is my alma mater, so I began to wonder what kind of work was being done at McGill. I got in touch with the head of psychiatry. He told me, “We’re not going to be able to solve that or anything else until we get our building fixed up.” It was in pretty bad shape. I decided to help out [resulting in the much-improved and renamed Irving Ludmer Psychiatry Research and Training Building].

I was still interested in the work being done at McGill and I got to meet Michael. He talked to me about his studies with the rats and pups and how they found that there were different DNA methylation patterns for pups who had been neglected and those that weren’t. I could see how important that work was. Things started to grow from there. We began talking to the Douglas and the Jewish General. [Former Jewish General executive director] Hartley Stern loved the idea of the centre. I give him a lot of the credit.

The centre will look through huge data sets, searching for patterns and clues to the causes of different mental illnesses. It’s a long-term project with no guarantees. Some donors might be more attracted to a surer thing.

If nobody starts doing this work now, where will we be in 25 years? This is a big data project – we’re going to need lots of cohorts to get the kinds of information that will allow us to find meaningful correlations. There are no guarantees with this kind of science. It’s pushing at the boundaries. At some point, we’re going to come up with something that’s very, very good.

It’s a wonderful cause. You can be in great physical shape, but if you’re experiencing depression or some other form of mental illness, you don’t have much in your life. And it doesn’t just affect you. It affects your whole family. This area of research hasn’t always received the kind of attention it deserved because of the stigma that’s been associated with mental illness.

I’m a businessman. I can make the business case for this. Mental illness affects millions of Canadians. What effect does that have on our productivity, on absenteeism rates?

How do you see the centre evolving?

We can’t bring everyone with this kind of expertise to Montreal, but we can build a virtual Silicon Valley in neuroinformatics and mental health. Michael tells me that science researchers in Quebec already cooperate with one another very well. We can build on that. Michael already has a lab in Singapore. Alan has international connections. We can reach out to researchers around the world and join forces. They can bring their expertise and their own research funding. Look at the Large Hadron Collider. These kinds of international research partnerships can be done.

You’re obviously very enthusiastic about science. Do you ever wonder what your life might have been like had you stayed on that path?

I find all of this fascinating. There are 150 billion neurons running around in our heads. You look at some images of the brain and it looks like a galaxy.

At McGill, I studied engineering and physics and I just loved it. A lot of my classmates went on to graduate studies and at least four of them became university professors. We were a tight group back then. I used to tell them that I wouldn’t be doing a graduate degree. I’d rather be a millionaire [laughs].

Sometimes I tell my wife, if there is such a thing as reincarnation, I’d like to put in a request. I’d like to know what my life would have been like had I stayed on the academic path. But I have no regrets. I’ve had a great life. And I’m able to help support the work of people like Michael, Celia and Alan. I think we can do something really important here.

the stigma that’s been associated with mental illness
You mean, in this instance, by you. Your association is rude, lacking in ethics, despite history and the examples it showed us, the stigma of Jews among them.
You have chosen to direct your prejudice differently, changing the prejudice not at all.