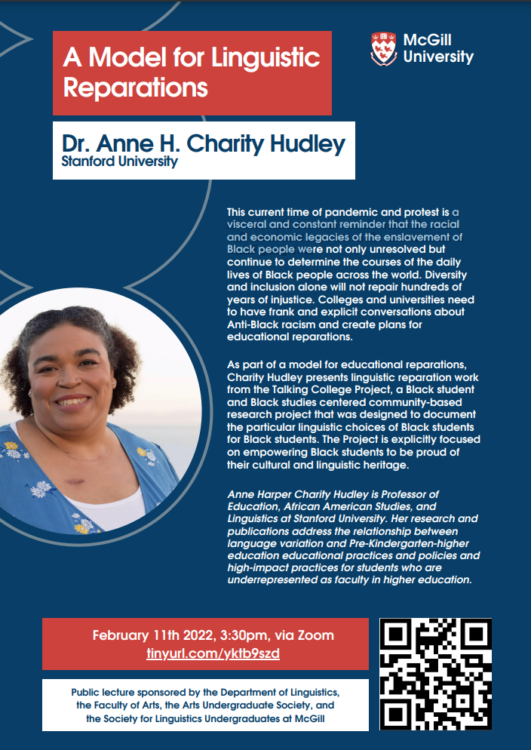 When we think about language, we tend to turn our attention to grammar, pronunciation and syntax. We focus on language as a tool that enables us to communicate with others. When seen through the lens of Linguistics however, language goes far beyond being just a means to express oneself. It points to additional considerations such as identity, power dynamics and inclusion.

As part of Black History Month programming, on February 11, McGill’s Department of Linguistics is hosting a special virtual lecture titled “A Model for Linguistics Reparations” by Anne H. Charity Hudley, Professor of Education at the Stanford University Graduate School of Education.

“As linguists, we recognize that all languages and dialects are equally rich, complex, and expressive, and an important part of community identity. However, we also know that linguistic discrimination is a real and often overlooked form of inequity,” says Jessica Coon, Professor and Canada Research Chair in Syntax and Indigenous Languages, who is a lead organizer of the event.

The lecture will feature findings and insights from the Talking College Project, a Black student and Black studies centred community-based research project that documents linguistic choices of Black students. The project is described as not only being about Black students but also for Black students in order to empower them.

It also addresses the larger question of how to create a more just learning environment, something that is pertinent for anyone who participates in the educational milieu. “Dr. Anne H. Charity Hudley’s focus on race and language in educational settings makes this work especially important in an institutional context like our own,” says Coon.

While most of us understand how languages differ from one another at a basic level, acknowledging language varieties can lead us to better understand how linguistic justice is connected to racial justice. We also become aware of how we personally use and perceive language through a much richer lens.

“Language varieties allow us to see many more layers of language contact, language expression, differences across space and time, different by social factors that may include people’s own history, where they’ve lived, geographic history… It could be their social history by class, social and racial and ethnic identification. And language varieties allow us to bring in a lot about choice; how I choose to use my language,” explains Charity Hudley.

In many ways, language becomes directly tied to one’s sense of self and empowerment. Depending on which language varieties are deemed acceptable and embraced in specific settings, how we view ourselves and others is significantly impacted. Within educational settings, how we teach language raises issues of representation among student bodies as well as faculty.

“The study of linguistics, the study of Indigenous languages, the study of African-Americans from across the Black diaspora have been fundamental in researching Linguistics in Canada but also in the U.S. But one thing that you really notice when you look at the departments in both countries is there are not a lot of Black people. What that does is change the questions [that are asked]. So, it’s really important for us to think about the ways that inclusion in studying language will change the ways that racial justice is studied and enacted upon using the areas that people who study language care about,” says Charity Hudley.

“A Model for Linguistics Reparations”
Virtual public lecture by Dr. Anne H. Charity Hudley (Stanford University)
February 11, at 3:30 p.m.
Register here (Pre-registration is required)
(The event is co-sponsored by the McGill Department of Linguistics, the Faculty of Arts, the Arts Undergraduate Society, and the Society for Linguistics Undergraduates at McGill)

Decolonization is not a metaphor

Black artists on surviving – and thriving – in...

Black history chronicles the best and the worst of...